When you think back to movies that shaped your childhood, one of the movies you probably think of is Stephen Spielberg's "ET: The Extra-Terrestrial". As one of the highest-grossing movies of all time, you'd think there'd be little for this movie to improve on. After all, it had great creature-effects for its day, and there's no reason at all for a director to go back and add a bunch of unnecessary CGI-effects to an old movie, right?

Like George Lucas before him, Spielberg takes a crack at sullying all your nostalgic childhood memories with the DVD version of "ET: The Extra-Terrestrial". From added CGI-scenes featuring ET's antics to digitally replacing guns with walkie-talkies, Spielberg goes out of his way to remind everyone that children are idiots, and the things that they love are usually stupid.

After wandering away from the spaceship while on a field-trip, hapless space-traveler E.T. meets whiny-kid-with-father-issues Elliot, and the two forge a bond so powerful that it transcends all suspension of disbelief. Elliot shows E.T. the in's and out's of Earth life, and in return E.T. gets Elliot drunk for the first time. But when E.T.'s homesickness reaches life-threatening severity, the two must join forces with the local highschool's Audio/Visual club on a pulse-pounding bicycle chase to freedom!

Join Shawn and Keith of "Cinester Theater" as they take on this heart-warming tale of love, understanding, and keys. Lots and lots of keys.

NOTE: This iRiff seems to suffer from the same synch-line issues that our "Back to the Future" riff did. Still not sure what keeps going wrong (we think it has something to do with how we render the track into an .mp3 file), but once again, the sync-lines come a second after the character in the movie says it. Sorry about that, and thanks for your understanding! 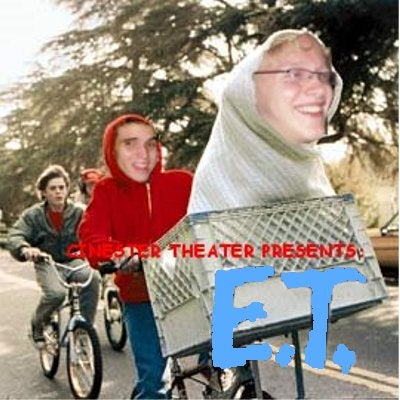