While most stories about living toys seem content to depict the heartbreaking reality of the gradual loss of childhood wonder while also weaving a touching tale of the of friendship in the face of adversity, one series has long dared to stand apart. Instead of filling us with a nostalgic sense of wistful sympathy, this series has scared us, thrilled us, made us roll our eyes, caused us to blame Jennifer Tilly for ruining all our nice things, been turned off before the 5th one is even halfway over, and then suddenly gotten back to scaring/thrilling us again. That series is, of course, Child's Play.

Deranged serial killer Charles Lee Ray is having a bad day. First he's gunned down by police, then he's forced to voodoo-stash his soul in a nearby Good Guy doll, and then he's given to 6 year old Andy as a birthday gift. Rather than taking the obvious opportunity to reform his ways and lead his new best friend on a series of wacky adventures where they thwart bank robberies and get Andy's parents back together, Chucky instead focuses on murdering his way across Chicago in a desperate bid to undo the voodoo that he do, and he's more than happy to let Andy take the blame for it all.

But the clock is ticking, and if Chucky doesn't find a way out of the doll, he'll become trapped in it forever. And since there's been like 6 of these movies now, I'm sure you're right on the edge of your seat to see how it all shakes out.

Join Shawn, Keith, and Brooks as they take on one of the most iconic horror villains in movie history! With goofy looking animatronics, weird puppets, voodoo spells, and adorable child-sized murder weapons, "Cinester Theater Presents: Child's Play" is a fast-paced festival of freaky fun that you'll never forget! Download it now, before there's a recall on all copies due to the excessive amount of lead-based paint we used to make it. 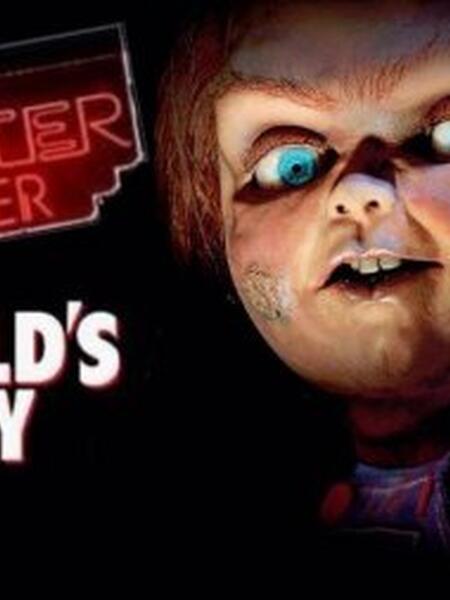