When people think "Batman", they probably imagine a thoroughly competent, dedicated individual who has spent his adult life honing his mind and body into the ultimate weapon against injustice. Those people are lucky, because they've never seen "Batman Returns".

After apparently rolling out of bed one morning and deciding to fight crime while dressed like a doofus, millionaire idiot Bruce Wayne patrols the streets of Gotham, throwing bat-shaped toys at loiterers, jaywalkers, and people with unpaid parking fines. But since Gotham's police force is apparently even more inept than he is, it doesn't take long for a duo of brand-new supervillains to show up with a scheme to bring the city's defender to his bat-knees.

With only the help of an elderly English butler and a complete lack of any sense of self-preservation, Batman blunders his way through legions of clowns, kitties, and umbrella-wielding midgets to prove that literally anyone can be a superhero.

Join Shawn and Keith as they suffer through one of the worst crimes ever released in theaters, "Batman Returns"!

WARNING: This iRiff can be deadly if you eat it. 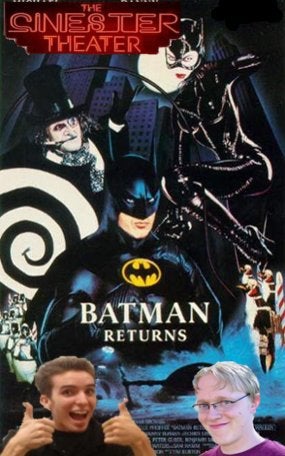