Election Day. Heroin for political junkies. A Michael Moore-sized headache for the rest of the populace.

Tired of those annoying political calls jamming up your cell phone? Up to your eyeballs with reams of dead trees being used to fill up your mailbox with donation begging mails from Candidate Spend-A-Shire? Sick of the endless attack ads interrupting your favorite soap opera or football game? Well, so are we.

Hearken back to 1944, when all was well with America. Well, aside from the Depression entering it's 12th year as well as fathers, sons and brothers fighting Nazis and Japanese all over the world. Not to mention those polls taxes, literacy tests and pesky ration cards. In it's favor, there were no Black Panthers at polling places or celebs like George Clooney making asses out of themselves.

From the FDR Library Archive comes a newsreel that gives a quick and sanitized look at the 1944 presidential campaign. From a golf announcing narrator to a cartoon FDR to Tom Dewey's moustache, the viewer gets a quick history lesson on the Constitution. From there, we see Grandma Walton and Maxine Andrews look-a-likes running a suburban California polling precinct. Then, it is off to the Scopes Monkey Trial-like party conventions, voters choosing between fireside chats or the Jack Benny program on their radios and finally voting tabulators making their horse racing picks while adding up the votes and taking calls from Cook County.

Voting was never so black and white and monotone. 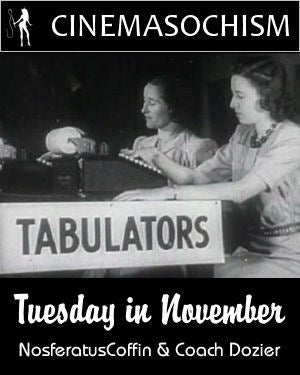