Cinemasochism: The Bottle and the Throttle

Cinemasochism: The Bottle and the Throttle

Drinking and driving. The biggest driving no-no that there is. (unless you are a Kennedy, of course)

While this message has been driven (pun intended) into the populace's head non-stop for the past 30 or so years, thanks to groups like MADD, SADD and sobreity checkpoints, back in 1968 it was just more "socially acceptable" to get behind the wheel, whether plowed like Charlie Sheen, or even after just a few Pabst's. To make up for this defiency, Sid Davis once again brings back the douchiest narrator <em>ever</em> to voice-over his short.

Just like clockwork, El Douche Narrator proceeds to lecture poor slob Bill about the dangers of even taking two sips on a Schlitz, while putting on a tone of voice that says, "I don't drink, I don't smoke, and I don't live in a neighborhood where people like you are allowed to drive.", as he mercilessly taunts Bill about running over a mother and little girl after having a few too many beers at a local beach party.

The usual police sobriety tests, anatomy diagrams and highway footage are then trotted out, warning the viewer that driving with dark glasses at night, driving cars with the ignition located on the left side and waiting in front of a green light while listening to Nickelback is just NOT safe.

By the end of the short, the narrator has convicted Bill of being a worse criminal and mass murderer than Mao, Pol Pot and Stalin put together, while at the same time is seemingly bubbling over with excitement that Bill will be spending the majority of his life in prison. 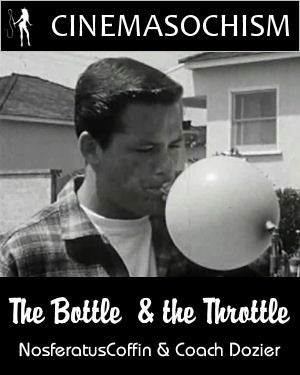