Cinemasochism: Let's Give a Tea

Cinemasochism: Let's Give a Tea

Before there were panty raids and sorority rushes, there was the calm dignity of The Tea. Mother and daughter, dressed in their Sunday best, sitting down to the tea table with their friends and dully passing the time (and probably a little wind, as well) while discussing the latest gossip about the ethnic woman down the street, whose husband got a bigger raise, or just whose husband is bigger, period.

If you think that all sounds quaint, apple pie and Chevrolet, well buddy, hold on to your hat. For in Let’s Give a Tea, we have four college girls who, thanks to their 97-year old club sponsor and Buckwheat-haired club president, are bamboozled into throwing a Tea for their parents. And any other old hag who happened to wonder in from off the street, it would seem as well.

Watch in horror as they are paralyzed by how to simply pour a cup of tea, how to write an invitation without it looking like the Unabomer’s scribbling, what gravy-stained dress and what cheap, QVC-type of jewelry they are to wear to such a formal occasion. Watch as the they knock over teacups, get crumbs on the carpet, drop into catatonic states at a moment’s notice and flirt with older, toothy women. You will never look at your Lipton the same way again. 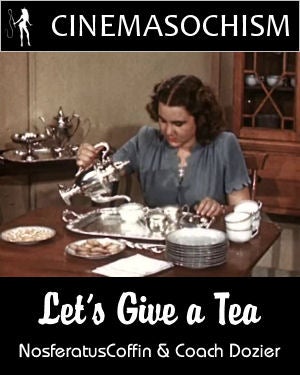