Adolescence. A time of trouble, turmoil, drama and trauma.

Even back in the 1950's, teens were staying out late, having late night Coke-jags and upsetting their parents by coming home late on school nights and leaving urine stains on the hallway carpet. What to do?

Well, Mother thinks the best way to deal with such horrors is to do what most 21st century parents do, which is to ignore it and let the little monster do whatever he wants. After a few days of the Oprah Approach, nothing has changed and with the Coke-jags getting longer and more caffeine-fueled, Dad finally says enough in enough. When Junior wakes up late for school and stumbles downstairs, bleary-eyed from his cola hangover, Father finally lets him have it.

Before bringing out the 2x4, Dad tells him that there will be no allowance, no dates and no dances for the next week, as Junior's rude behavior is an affront to all that is good and decent in the world. Junior, now in a psychotic rampage, rushes upstairs, puts on his prison pajamas and proceeds to look in the Help Wanted section for male stripper jobs.

As we end this little McGraw-Hill nightmare, we see mother and Father sipping their Irish coffees and getting ready to make another kid. Without anything being resolved, as per usual. 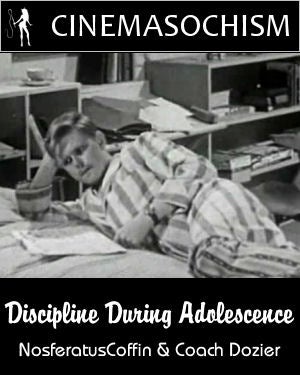