He may appear to be normal, but don’t be fooled. Boys Beware! And so should you.

Ah yes, the quaint days of the early 60′s. When shorts were still in black and white, all boys names ended in the letter “Y”, muscle cars were still made in America and when all homosexual men were portrayed as pedophiles, perverts and killers by movie studios.

In “Boys Beware”, we get a crystal-clear look at the attitudes of post-war American society when it came to homosexuals. According to the policeman/narrator, all gay men were just waiting to prey on young teenage boys with the same type of appetite as Michael Moore at the Taco Bell all-you-can-eat-buffet. Boys were advised to avoid strangers at all costs, treat all men wearing sunglasses and bow ties with the utmost suspicion and to accept guilt by moralizing courts when victimized by such men.

Take this one with a strong dose of scotch, if only while vainly trying to ignore maybe the most cheerful and inappropriate musical score this side of “Manos” The Hands of Fate. 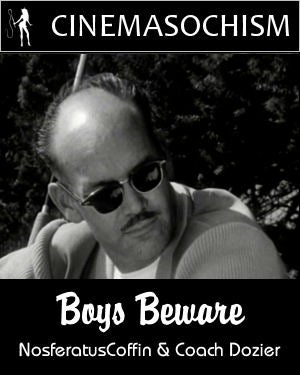