The Ghosts and Johnny watch an especially crappy movie, while trying to ignore an annoying paranormal investigator (special guest actor Scott Zee, star riffer from THE TURKEY SHOOT) who is making life at the apartment even weirder than usual.

Enjoy the wisecracks from the GHOSTS ON THE BIG BROWN COUCH as they face 1973's CHILDREN SHOULDN'T PLAY WITH DEAD THINGS, a zombie film that is about 10% zombie and 90% cutesy actors. Try not to throw something at the screen as screenwriter Alan Ormsby takes the lead role, one of the most obnoxious characters in movie history! Marvel at the fact that the film's director Bob Clark eventually went on to make highly successful films such as BLACK CHRISTMAS, PORKY'S, and even A CHRISTMAS STORY (weird, huh?).

All of this entertainment / frustration is yours for a measly $1.50, all wrapped up in a neat little Video On Demand package. Just download and watch! By the end you'll understand why CHILDREN SHOULDN'T PLAY WITH DEAD THINGS... or movie cameras.

Special thanks to Scott Zee for lending GHOSTS ON THE BIG BROWN COUCH a touch of class. This episode wouldn't have been the same without your sarcastic presence. 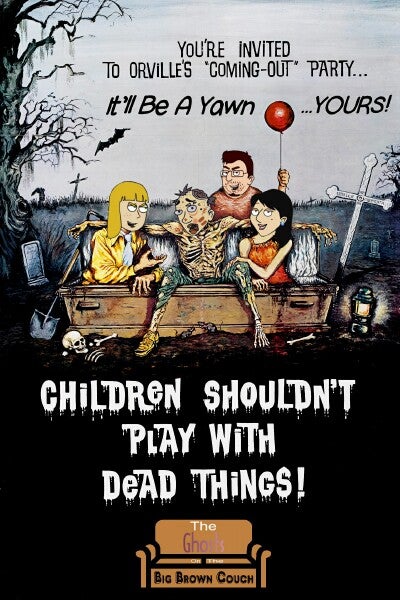