EP.1:"THE PURPLE DEATH"{run time:25 min} Steve Rogers:Super-Soldier; championing freedom by smashing nazi skulls!! ...is a completely different guy.  this Captain America is more of an isolationist. Instead of going overseas, he somehow managed to get himself a job as a district attorney -- a job he frequently abandons so that he can dress up in pajamas and cavort about the city (as per the norm, this goes un-noticed or perhaps un-reported by his colleagues. Lets face it, there have been government employees caught doing worse).
...In this first chapter, a villain known as The Scarab hatches a plot which emerges with the dangerous "purple death" poison! A chemical that allows The Scarab to control a person's minds and/or kill them, so that he might obtain the plans for a powerful "vibrator!"  The cards are stacked against our hero... but Captain America is determined! Though he may not have super powers, or the iconic shield; he does have a gun! ...and heck! That's as American as apple pie!  So follow this other, different, Captain America as he shoots and murders everyone even remotely in his way!  Woo-HOOO!! U.S.A.!!!....also, he goes after The Scarab to stop him from doing something with a "vibrator." 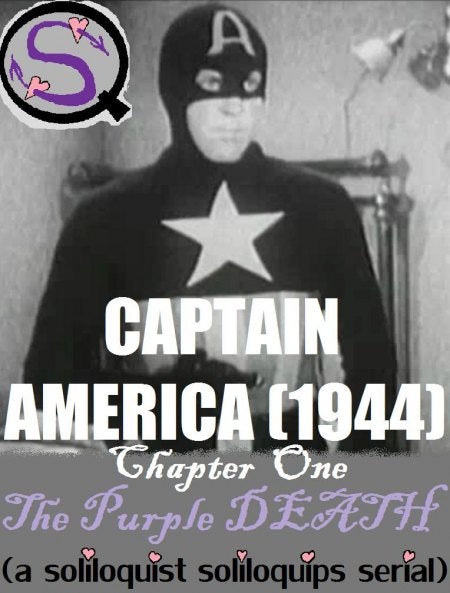 The Soliloquist
Intended for mature audiences