Atomic Treatment Presents: Episode 3: Lightning Chamber
Gene Autry was known as the "Singing Cowboy".  I never understood that as I always thought of him as the "Pansy Cowboy". Not only did Jack Palance crap bigger than Autry, Martin Short in "The Three Amigos" crapped bigger than him.  This series predates Gene Autry's famous steed "Champion" who starred in his later films with him.  Guess he hadn't quite developed his schtick yet.

In any case, this Donny Osmond of the Old West somehow gained popularity despite his blandness and developed a following among Americans with his patronizing "Cowboy Code", a schmaltzy code of ethics for kids idolizing Westerns. One of the rules in the Cowboy Code was "never shoot first" meaning that, in a logical jump, justifiable homicide was being taught to young impressionable kids of the forties.

Of course none of this has anything to do with this chapter of The Phantome Empire which carries on the vague mess of a storyline. There's something about a hidden kingdom and cowboys and a couple of plucky kids who don't seem at all disturbed by the recent violent death of their father.  No, I just needed to vent about Gene Autry, the pale shadow of his superior, Roy Rogers (and Trigger was superior to Champion for that matter). So for what it's worth, I give you chapter three of this incomprehensible mess called the Phantom Empire.

This is Part 3 in the Phantom Empire iRiffs crossover project. For all chapters please check here: http://www.rifftrax.com/iriffs/phantom-empire 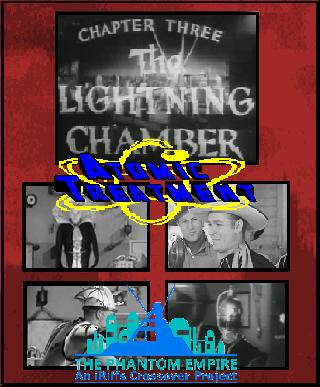