What would you do if you thought this was the last day of civilization?  If your were ARTist Chris Wolvie and the day coincided with the anniversary of the first-ever "animated feature film"...you'd spend the last day RIFFing it, of course.

Yes, Walt Disney's quote-masterpiece-unquote, "Snow White and the Seven Dwarfs", turns 75 years old on the day the Mayan Calendar (and, thus, the world) comes to an end.  So enjoy it in a new way: with Chris Wolvie mocking it.  Then, maybe, you'll WISH the world had ended! (Just kidding; it's pretty good.)

WARNING: EXPLICIT CONTENT - Just because the FILM is G-rated doesn't mean the WORK is.  This is not for the kiddies.  This is for the grown-up children who suddenly realized that their cherished childhood memories weren't all that great.  As such, this Work contains many an innuendous comment and quasi-harsh language.  Parental discretion is adviced...though not expected, really. 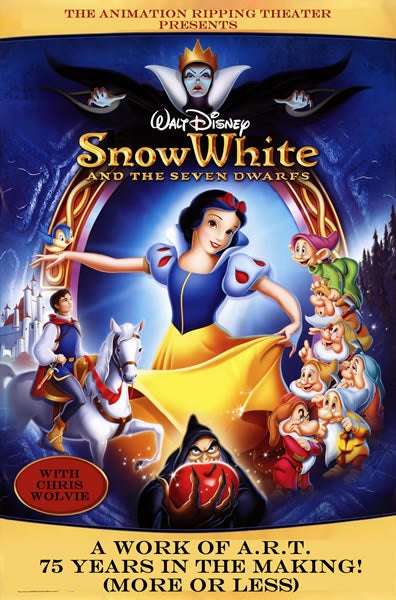