America's Favorite Team-Up vs. Radar Men from the Moon - Ep. 1

America's Favorite Team-Up vs. Radar Men from the Moon - Ep. 1

This iRiff contains the short and riff, pre-synced and a host segment.

Back in the day, television was called serials, and you had to wait, like, FOREVER for another one to come out. Plus, they were SOOOOOOOO crappy.

Take “Radar Men From the Moon.” Please! Get it? Like the comic said? It’s about a guy who’s pretty much an annoying Rocketeer, his some lady and two random guys as they take a rocket to the moon. The one guy (Cammando Cody, no kidding) flies around like a spaz, and fights devil raccoons.

Join America’s Favorite Guy (Doug from the Orwellian Nightmare Society) and stand-up comic Ed Greer as they team-up to watch the first episode of Radar Men From the Moon! 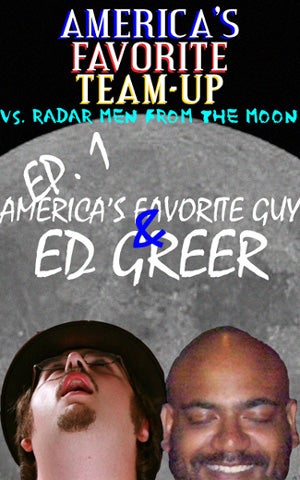