American Werewolf in Paris: The One Man Band

American Werewolf in Paris: The One Man Band

Do you remember John Landis' classic take on the werewolf film, American Werewolf in London?  The classic scene with the "American Balloon Thief?"  The amazing transformation sequence that won a special Makeup Effects Oscar?

This is not that film.

Less of a sequel and more of a...well, completely unrelated film, "American Werewolf in Paris" proved that yes, a film was made 16 years after the other one.  Starring Kirk Cameron-alike Tom Everett Scott (from others films in the late 1990s) and Julie Delpy (who shows there's more than one way to pronounce 'cellar'), the plot revolves around a group of extremely hairy monsters that stalk the streets of Paris hating Americans...and there's werewolves, too!  But I kid...the real horror in this film revolves around CG embarassing even for 1997 and, of course, gratuitous use of Smash Mouth.

Join me, Seth Paul, on my first venture into the world of iRiffs, as I pour a little Nair on this 'classic' and remind it a critic's bark is worse than its bite.  And don't worry; I keep the bad dog jokes to a minimum. 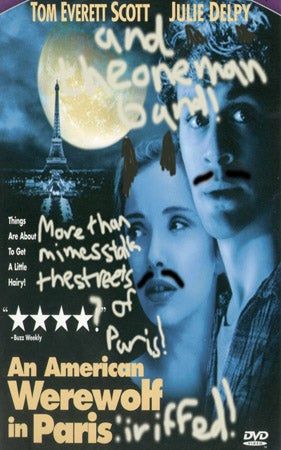