ALCOHOL IS DYNAMITE - The Turkey Shoot with Scott Zee

ALCOHOL IS DYNAMITE - The Turkey Shoot with Scott Zee

Sure, I can say without rebuke, we've all experimented at a young age with the explosive effects of booze. Whether it be that swig of shine from Granny's still, or..

Actually, I can't think of a single real, live-action instance when a libation has ever been so incendiary. Where dark, gaseous matter is violently strewn from the ear cavities, suggesting that alcohol is more than a mere oral irritant and liquid depressant.

Well, at least we have the notion of do-gooding, sports writer Tom Ullman. He claims that alcohol, in the hands of minors is a deadly combination. A stress-relieving 'POISON', if I may, that brings decadence to young minds and horribly taints the essence of good, clean American youth.

And when this teen-borne alcohol abuse causes risk to health, livelyhood, property, and even life itself, Tom, for some reason, calls this poison 'DYNAMITE'! IT JUST WORKS, DAMMIT!

For you (the viewer) we hope this educational ephermeral will be most informative in the ways of preventive measure. And may it not sway you from the fact that Mr Ullman is a stodgy, generalizing weinis trying to appeal to head-strong teens with certain buzz-words he read about once in 'Boy's Life'.

And all our hopes that your own meaning of 'dynamite' serves you well.

*note: It must be clearly stated that the mere 'combination' of minors and alcohol can be damaging and destructive to a human life or lives as the case may be. This should not, however, be terminology used to describe the contents of retail alcoholic beverages,as the title of this film may suggest. In no way do common barbiturates contain certain elements such as nitroglycerin, kieselgur, sodium carbonate, mechanical elements such as blasting caps, fuses, metal cables, or even other volatile elements such as ammonium nitrate or possibly trinitrotoluene (ew! nasty!). DO NOT think this to be true. It is our considered opinion that you SMARTEN UP! This is our considered opinion. But alcohol may not really be 'dynamite'. Figuratively speaking? Maybe. 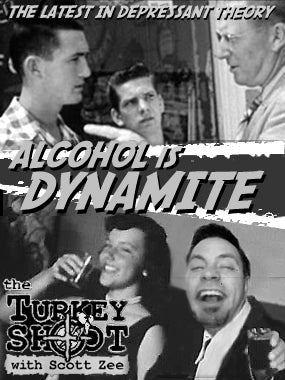